I do not share any piece of the common attitude of disdain or measured contempt for “Humanae Vitae.” Pope Paul VI, who led the Second Vatican Council and declared most emphatically the world’s great need for the Social Gospel, saw this teaching as an integral part of his work. It seems to me that this encyclical does indeed have a tone that differs from his other writing – that he wrote defensively, aware of the hornet’s nest he was kicking. But I could easily be projecting, shoving the popular rejection of the encyclical back into the text itself.

I think it’s silly to say that the encyclical was divisive and ineffective – somehow unlike Paul’s other teaching. Paul called for an end to war: didn’t happen. He called for wealthy nations to treat developing nations as brothers and sisters, and to pour out our hearts extravagantly, as the only alternative to war: didn’t happen. He called for higher taxes: that was divisive. He defended the United Nations – not endorsing any specific structure, but asserting the world’s desperate need for a governmental body with global authority: that was divisive. “Humanae Vitae” was in no way unique among his teaching! If it was divisive, then we should reach across the divide with determination and perseverance! If it “failed” yesterday, struggle toward a better tomorrow!

We don’t have to speculate about the context in which Pope Paul thought his words should be heard. “Humanae Vitae” cries out: “No one can, without being grossly unfair, make divine Providence responsible for what clearly seems to be the result of misguided governmental policies, of an insufficient sense of social justice, of a selfish accumulation of material goods, and finally of a culpable failure to undertake those initiatives and responsibilities which would raise the standard of living of peoples and their children. If only all governments which were able would do what some are already doing so nobly, and bestir themselves to renew their efforts and their undertakings! There must be no relaxation in the programs of mutual aid between all the branches of the great human family.” To be sure, we can and do fuss about details, but who can be contemptuous of his intent?

He made three predictions, should the teaching in HV be rejected. First, he spoke of a general lowering of standards of morality. Was he right? It was five years from the publication (and vilification) of “Humanae Vitae” to the decisions in Roe v Wade and Doe v Bolton.

Second, he predicted that rejecting the teaching would lead to a great new disrespect for women. That, obviously, is controversial; women are in positions of power all over the world, and a woman won the popular vote in the American presidential election of 2016. And third, he predicted that what was permissible would become mandatory. I think he was right about both, and point to Hillary Clinton’s much-celebrated speech at the Beijing women’s conference as evidence of both. She spoke about advances in women’s rights in Beijing, which was then and still is now engaged in the greatest assault on women’s rights in human history, a great campaign of population control directed at one sixth of the women in the world, enforced by governmental monitoring of menstrual periods, including inter alia forced insertion of IUDs and forced late abortion. This campaign is anti-life, anti-choice, anti-child, anti-woman – and Clinton ignored it. This was a great turning point in American policy vis-à-vis coercive population control, and a revealing update on the state of feminism. And, it seems to me, it was a chilling affirmation of the wisdom of Pope Paul’s prophetic cry.

I accept and embrace the extraordinary teaching of Pope Paul VI and the Council he led and implemented – about social justice, and about personal morality. I think he suffered as an early leader promoting a consistent life ethic. 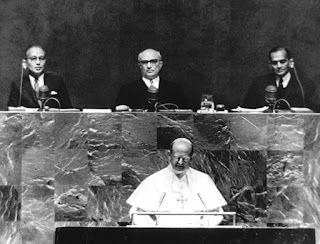