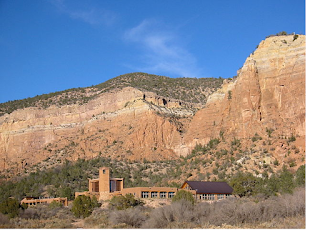 In 1972, I spent 40 days in a hermitage a mile from Christ in the Desert Monastery, in Abiquiu, NM. “Hermitage”? Please translate into standard modern English. That is, I went camping with a friend for a couple of weeks, then alone for a few weeks more.

I had no agenda for the summer, just an idea that felt like an invitation. Jesus says we should call his Father, the creator of the universe, Our Father. What does that mean? It’s not a proposition; it’s supposed to be a way of life, a fundamental attitude toward everything. So, mull it over and try it out.

I had no agenda, but I ended up doing this and that. I read the Bible cover to cover, again. I tried some vigils. I visited the monastery most days, to listen and watch and pray; I learned a great deal from Fr. Aelred, Fr. Gregory, and Br. Anthony. I drafted a letter to a friend, over and over (check out Jim Risen’s “Wrath of Angels” for that story, if you want). I listened to coyotes and elk, and watched 13 buzzards. I met the angel of the river (see Clarence in “It’s a Wonderful Life”). And I climbed around in the canyons and mesas.

One day, I went up the Rio Chama, past the monastery, past their fields, past their hermitage (which looked like a real one, with stone and adobe), and a distance farther. Then I examined the north wall, to plan a route up the cliff, and tried to climb out of the canyon. Halfway up, I got came to a dead end. Any serious rock-climber could have kept going easily, but I couldn’t; I had to back up. I had run out of ledges and hand-holds that would work for me. I turned around, and froze.

Coming up, I had reached easily over a gap, grabbed rock a few feet up, and clambered across. Going down, I had to stand on a ledge and jump forward and down three or four feet to a ledge that was perhaps 15 inches wide. An easy jump. Picture standing on the kitchen table, with three cinder blocks lined up on the floor, a yard away from the table. Jump from the table to the cinder blocks. Easy.

Easy, except that if I missed the jump, I would die. I would fall 200 feet, bouncing off the cliff a little but mostly just falling, onto sandstone boulders. No one would look for me for a couple of weeks, or maybe months. And when they did look, they wouldn’t have any idea where to look in an area of 314 square miles, assuming they found my tent and looked within ten miles of it. Buzzards and coyotes might scatter my bones before anyone found me, and I would disappear without a trace. Easy jump, if you just do it. But I was scared.

I sat a while, enjoying the incredible beauty of the canyon, the same colors as the Grand Canyon. I listened to the silence, with an occasional bird. I smelled the hint of mesquite on the hint of a breeze. I prayed the Rosary, thinking about Mary’s incredibly eventful life. Then I made an easy peasy little jump.

The story is on my mind, because I’ve been thinking about my friend Phil Lawler, who is promoting his book about Pope Francis, the wayward shepherd who’s killing off his flock parish by parish. Phil was on EWTN shortly after the book was released, being interviewed by that polished pink guy. And the interviewer set up a question. A gaggle of bishops got all gussied up for a synod, and everybody who really knows anything about anything that matters knew that the real issue at the meeting was how to interpret and enforce footnote 734 in Latin-Latin about how to handle sinners who come to Mass with their toupees crooked and a tangled marital history which has already been completely explained by the ancient and venerable bishops of Latvia and Timbuktu. Something like that.

And I thought, no. The Pope thinks that marriage is joyful. Start there.

If you’re scared, there’s good reason to be scared. If you’re not, there’s not.

I choose to trust my Father.